Following on from my previous post on BCI, I’d like to share a Lunch & Learn session I presented at Deepend on the topic with my partner Gen.

Gen and her colleagues at Macquarie University have been investigating the Emotiv EPOC to validate it for use in scientific experiments, replacing more traditional EEG headsets. To cut a very long story short, they’ve found it does surprisingly well. This is something that Emotiv are obviously very pleased to hear.

One of the key difficulties was understanding the latency of the signals, as the researchers need to generate meta-data about “presentations” of visual or auditory stimulus which have to be perfectly aligned with the brain-activity recordings (for ERPs). They were initially worried about the Emotiv’s use of WIFI rather than cables, but it turned out within acceptable tolerances.

So when they had finished with one of the headsets I managed to borrow it for a few days, and finally wire up the Lunapian Lander game I wrote in 2009 to my brain!

I took the whole setup into Deepend after only finishing it the night before, and was very nervous as to whether I could actually land a spaceship with my mind in front of 30 people…

Did I manage it? Find out for yourself on the video on YouTube. 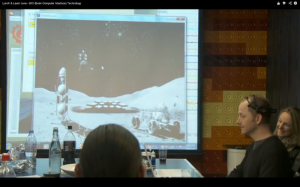 This entry was posted in Miscellaneous and tagged brain-control, cognitive-science, innovation. Bookmark the permalink.